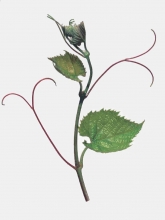 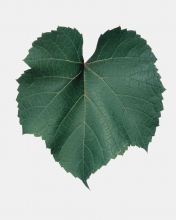 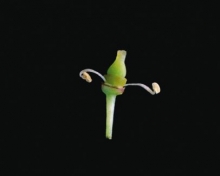 Although its exact origin is unknown, this variety results from a crossbreeding involving Vitis labrusca and Vitis riparia.
Evolution of mother vine surfaces

The identification is based on:
- the tip of the young shoot that is half open to closed, with high density of prostate hairs and a piping anthocyanin coloration,
- the yellow young leaves, with, on the lower side of the leaves, a high density of prostate hairs on the blade and a low density of erect hairs on the veins,
- the shoots with a ribbed surface, and three or more consecutive tendrils,
- the large, involute, entire adult leaves, with a slightly open lyre-shaped petiole sinus, a thick leaf blade, teeth with straight sides, and on the lower side of the leaves, a low to medium density of erect and prostate hairs,
- the female flowers with bulging flower buds,
- the medium to large, round-shaped berries, with foxy aromas and a blue black skin,
- the dark brown woody shoots with a ribbed surface.
Genetic profile

Vialla has a low to moderate tolerance to the root form of phylloxera. For this reason, Vialla should only be planted under unfavorable conditions for this pest. It is also moderately resistant to Meloidogyne arenaria nematodes.
Adaptation to the environment

Vialla is extremely susceptible to chlorosis and it only resists up to 4% of "active" limestone and an ICP of 2. It is also susceptible to drought and must be used under conditions with a sufficient water input. This rootstock is well adapted to acidic and decalcified soils as sandy, granitic or fairly deep argilo-siliceous soils.
Interaction with grafts and production objectives

Vialla generally has a good compatibility and affinity with grafts as the diameter of its shoot is similar to that of the grafts. Vialla confers a fairly high vigor but induces a limited fertility. This rootstock has an influence on the earliness of the vegetative cycle and the varieties grafted onto it tend to produce less acidic products. Vialla works well with Gamay.
Vegetative propagation aptitudes

Vialla wood production is low (15 000 to 50 000 m/ha). Cleaning and disbudding is difficult due to the large number of tendrils. Vialla has good cutting and grafting aptitudes, with sometimes large calluses on the graft point.
Resistance to aerial parasites

Vialla is fairly resistant to the gall form of phylloxera and shows a good resistance to downy mildew.
Clonal selection in France