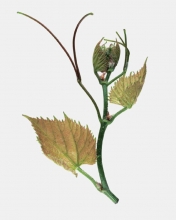 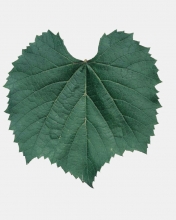 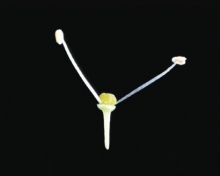 The identification is based on:
- the green tip of the young shoot that is half open or closed, with a medium density of prostate hairs,
- the green young leaves,
- the vigorous, elongated, dull and green shoots, with a ribbed contour, a slightly elliptic section and a low to medium density of erect hairs on the veins,
- the bifid or trifid tendrils, sometimes ending with an rudimentory flower bud,
- the large, involute, wedge-shaped adult leaves, with an open U- or V-shaped petiole sinus, mucronate teeth with straight sides, green veins, and on the lower side of the leaves, a low to medium density of erect hairs, particularly arond the vein bifurcation,
- the male flowers,
- the brown purplish woody shoots.
Genetic profile

5 C is highly tolerant to the root form of phylloxera. It is also very resistant to Meloidogyne incognita nematodes.
Adaptation to the environment

5 C resists up to 35% of "total" limestone and 20% of "active" limestone. Its resistance to iron chlorosis can thus be considered as moderate to good.
Interaction with grafts and production objectives

5 C confers a high vigor to the grafts, without delaying the maturity. It works particularly well with Riesling and gives qualitative products.
Vegetative propagation aptitudes

This rootstock wood production is good (40 000 to 90 000 m/ha) and has good cutting and grafting capacities. 5 C internodes are long with a moderate diameter and a limited growth of lateral shoot buds.
Resistance to aerial parasites

5 C is not very or moderately sensitive to the gall form of phylloxera and is highly resistant to downy mildew.
Clonal selection in France