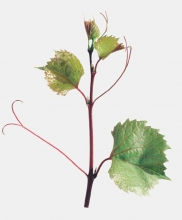 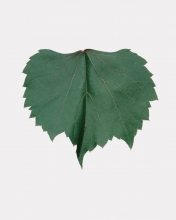 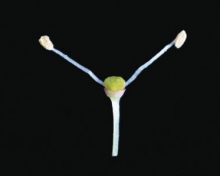 This root stock was initially noticed by R. Sijas at Montferrier-sur-Lez near Montpellier, and was then studied by Alexis Millardet who name it, 1879.
Genetic origin

This is a Vitis rupestris Scheele selection.
Evolution of mother vine surfaces

Rupestris du Lot resists up to 25% of "total" limestone, 14% of "active" limestone and to an ICP of 20. Its resistance to drought is moderate and its use should be avoided in too compact soils. This rootstock is slightly tolerant to chlorides and absorbs potassium fairly well. Rupestris du Lot is well adapted to poor and with no or very little limestone soils.
Interaction with grafts and production objectives

Rupestris du Lot easily grows suckers, but it usually has a good affinity with grafts. It works especially well with Grenache and Ugni blanc. This rootstock confers a high vigor and induces considerable vegetative growth. Rupestris du Lot tends to delay the growth cycle and the risk of coulure with some susceptible varieties may increase.
Vegetative propagation aptitudes

Rupestris du Lot has short internodes with small to moderate diameter. The canes are hard and the growth of lateral shoot buds is widespread. Rupestris du Lot wood production is low (20 000 to 40 000 m/ha) but this rootstock has good cuttings rooting and grafting capacities.
Resistance to aerial parasites

This rootstock is very sensitive to the gall form of phylloxera. It is also sensitive to anthracnose but is highly resistant to downy mildew.
Clonal selection in France