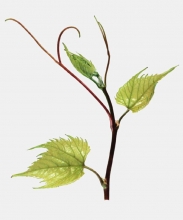 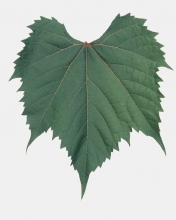 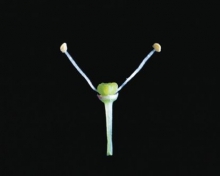 This is a Vitis riparia Michaux selection.
Evolution of mother vine surfaces

The identification is based on:
- the tip of the young shoot that is completely closed, in the shape of a crook with a very high density of erect hairs but no prostrate hairs,
- the green young leaves, with well developed stipules at the base of the petioles,
- the shoots with a horizontal bearing, an even surface, no bloom, an elliptic section, no erect and prostrate hairs, not very noticeable nodes with long, colored on the dorsal side internodes,
- the large, cordate, entire adult leaves, with an widely open U-shaped petiole sinus, an undulate leaf blade between the veins, long teeth compared to their width, with straight sides or with one side slightly convex and one side slightly concave (the three terminal teeth of the central main vein and the two main adjacent lateral veins are longer and more developed), and on the lower side of the leaves, no prostrate hairs and a high density of erect hairs on the veins, more particularly on the bifurcation of the veins,
- the male flowers,
- the long, brown woody shoots with no erect and prostrate hairs.
Genetic profile

This rootstock is adapted to acidic or decalcified soils. On the other hand, it is very sensitive to chlorosis and only resists to less than 15% of "total" limestone, 6% of "active" limestone and an IPC of 5. It is well adapted to humidity but is very sensitive to drought and is poorly adapted to compact soils with too much clay. This rootstock absorbs easily potassium, but poorly absorbs magnesium. It may thus promote magnesium deficiency symptoms, dessication of the stems and less acidic musts. This rootstock should be used in gravelly and fairly fertile soils with a sufficient water input. It should not be avoided in poor, dry or superficial soils.
Interaction with grafts and production objectives

The radial trunk growth of this rootstock remains limited. It is said that this rootstock has a “thin leg” which may create substantial diameter differences with the grafts and the recquirement for trellising. The development speed of the young plants is good. Riparia Gloire de Montpellier confers a very low vigor and the vine development is reduced. Riparia Gloire de Montpellier promotes floral initiation but given its very weak vigor, the yields obtained are usually limited. This rootstock has an influence on the earliness of the vegetative growth and under adapted conditions, with a sufficient plant density it induces the production of quality fruits. Riparia Gloire de Montpellier has a very good affinity and works well with Cabernet-Sauvignon, Chardonnay, Chenin, Cot, Gros Manseng, Merlot, Sauvignon and Tannat.
Vegetative propagation aptitudes

Riparia Gloire de Montpellier wood production is good (40 000 à 80 000 m/ha). The internodes are long with an average diameter. The growth of lateral shoot buds is limited and the canes are not very ramified. This rootstock has good cuttings and grafting capacities.
Resistance to aerial parasites

Riparia Gloire de Montpellier is moderately tolerant to the gall form of phylloxera and is resistant to downy mildew.
Clonal selection in France