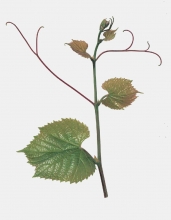 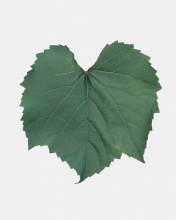 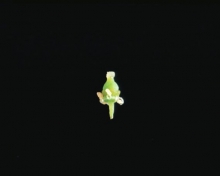 The identification is based on:
- the tip of the young shoot that is half open with a medium density of prostate hairs,
- the slightly bronzed young leaves,
- the elongated shoots with a ribbed surface, green internodes and red nodes on the ventral side, and red internodes on the dorsal side, and a low density of erect hairs on the nodes,
- the bifid or trifid tendrils,
- the wedge-shaped, large, dark green adult leaves, with a blistered, sometimes slightly revolute leaf blade, undulate between the veins and folded near the petiole sinus, a lyre-shaped petiole sinus, a weak anthocyanin coloration of veins, and on the lower side of the leaves, a low to medium density of erect hairs,
- the female flowers,
- the very small, round-shaped berries, with a blue black skin
- the dark brown woody shoots.
Genetic profile

RSB 1 is highly tolerant to the root form of phylloxera.
Adaptation to the environment

RSB 1 resists up to 40% of "total" limestone, 20% of "active" limestone and an ICP of 50. It is highly resistant to iron chlorosis but it does not absorb magensium very well. This rootstock is adapted to temporary water excess during the spring and its resistance to summer drought is good. RSB 1 is well suited to not very fertile and limestone soils.
Interaction with grafts and production objectives

RSB 1 has a good compatibility with grafts. It confers a high vigor, especially during the first part of the vine life (first 15 years) and induces fairly high yields. RSB 1 is very well suited to Ugni blanc.
Vegetative propagation aptitudes

RSB 1 wood production is very good (50 000 to 90 000 m/ha) and has moderate cuttings rooting and grafting capacities, especially with Ugni blanc. Its internodes are long with a medium to large diameter.
Resistance to aerial parasites

RSB 1 susceptibility to the gall form of phylloxera is low to moderate and it is highly resistant to downy mildew and anthracnose.
Clonal selection in France