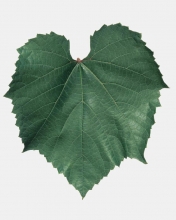 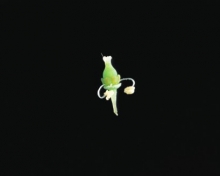 The identification is based on:
- the tip of the young shoot that is half open or closed, with a piping anthocyanin coloration and a medium density of prostate hairs,
- the green, slightly bronzed young leaves,
- the elongated shoots with ribbed surface, a circular or slightly elliptic section, red or red-striped internodes, and a low density of erect hairs on the nodes,
- the bifid tendrils,
- the large, soft, wedge-shaped, entire adult leaves, with a flat leaf blade, involute on the edges around the teeth, an open U-shaped petiole sinus, short teeth with convex sides, a weak anthocyanin coloration of veins, and on the lower side of the leaves, a low density of erect hairs,
- the female flowers,
- the very small, round-shaped berries, with a blue black skin,
- the browny grey woody shoots with darker nodes.
Genetic profile

5 BB is highly tolerant to the root form of phylloxera and to Meloidogyne incognita and Meloidogyne hapla nemtodes. On the other hand, its resistance to Meloidogyne arenaria nematodes is only moderate and it seems susceptible to Agrobacterium vitis.
Adaptation to the environment

This rootstock resists up to 35% of "total" limestone, 20% of "active" limestone and an IPC of 40. Its resistance to iron chlorosis is moderate to good. 5 BB is also adapted to humid conditions and particularly to sandy soils.
Interaction with grafts and production objectives

Generally speaking, 5 BB confers a very high vigor to the grafts and tends to delay the maturity. It is sometimes incompatible with some varieties (for example: Cabernet franc, Cabernet-Sauvignon, Colombard, Sauvignon) particularly when they carry the grapevine leafroll-associated virus 2 (GLRaV-2). In the event of a grapevine fanleaf virus infection, 5 BB clearly shows the presence of endocellular cords in the wood vessels. In terms of production, this rootstock, which is sometimes used to replace missing plants, tends to favor alternating phenonema and irregular results depending on the year. 5 BB sometimes induces the production of fruits with low sugar and polyphenol contents.
Vegetative propagation aptitudes

5 BB wood production is very good (80 000 to 100 000 m/ha) and can even be considered as the largest producer among the most frequently used rootstocks. Its internodes are long with a medium diameter and the growth of lateral shoot buds is limited. 5 BB has good cutting and grafting capacities.
Resistance to aerial parasites

5 BB is not very or moderately sensitive to the gall form of phylloxera and is highly resistant to downy mildew.
Clonal selection in France