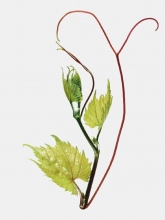 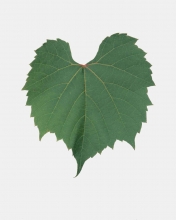 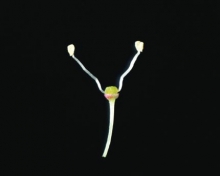 This variety results from the crossbreeding of 161-49 Couderc and 3309 Couderc.
Evolution of mother vine surfaces

The identification is based on:
- the tip of the young shoot that is closed, with a very low density of prostrate hairs,
- the slightly bronzed young leaves,
- the shoots with an elliptic or circular section and a strong anthocyanin coloration,
- the medium , circular, entire adult leaves, with an open U-shaped petiole sinus, with sometimes naked petiole sinus, a smooth, slightly involute leaf blade, sometimes slightly goffered or hammered, a strong anthocyanin coloration of veins, and on the lower side of the leaves, a low density of erect hairs and no prostrate hairs,
- the male flowers,
- the browny red to purplish woody shoots, with no erect and prostrate hairs.
Genetic profile

Gravesac is very highly tolerant to the root form phylloxera. It is however sensitive to Meloidogyne incognita and Meloidogyne arenaria nematodes.
Adaptation to the environment

Gravesac resists up to 15% of "total" limestone, 6% of "active" limestone and an ICP of 5. Its resistance to iron chlorosis is thus low to moderate. It has a very good behavior into acidic soil (soil enricher to increase soil pH are however necessary before planting under acidic conditions). This rootstock is also adapted to temporary water excess conditions during the spring and its resistance to drought is moderate. Gravesac is adapted to sandy or gravelly soils.
Interaction with grafts and production objectives

Gravesac shows a good affinity with grafts and the vigor confered is moderate to high. The varieties gratfed onto this rootstock produce steady and rather high yields, and their fruits are usually good quality.
Vegetative propagation aptitudes

Gravesac has medium to large diameter internodes and the growth of lateral shoot buds is limited. Gravesac canes are fairly hard and its wood production production is goo (40 000 to 70 000 m/ha). This rootstock also has good cutting and grafting capacities.
Resistance to aerial parasites

Gravesac is moderately sensitive to the gall form of phylloxera and shows a very good resistance to downy mildew and to anthracnose.
Clonal selection in France

In France, the only certified Gravesac clone carries the number 264 and it is multiplied on 112 ha 44 ares of mother vines producing certified material, in 2017.