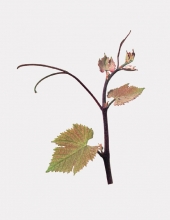 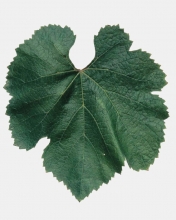 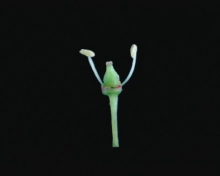 Berlandieri - Colombard 2 (BC 2)
Breeder/selector and year of obtention

Based on genetic analyses carried out in Montpellier, this variety results from the crossbreeding of Vitis berlandieri and Vitis vinifera cv. Ugni blanc.
Evolution of mother vine surfaces

The identification is based on:
- the tip of the young shoot that is open, with a high density of prostrate hairs and a piping anthocyanin coloration,
- the bronzed young leaves,
- the shoots with a very ribbed surface,
- the medium to large, wedge-shaped adult leaves, with a fairly thick leaf blade, shallow upper lateral sinuses, a slightly open lyre-shaped petiole sinus, long teeth compared to their width with straight or convex sides, and a low to medium density of erect hairs on petioles and on the veins on the lower side of the leaves,
- the hermaphrodite flowers,
- the small, round-shaped berries with a blue black skin.
Genetic profile

BC 2 is moderately to strongly tolerant to the root form of phylloxera.
Adaptation to the environment

BC 2 is well adapted to limestone soil and can resist up to 40% of "active" limestone.
Interaction with grafts and production objectives

BC 2 cutting capacity is medium and its grafting aptitude is good.
Resistance to aerial parasites

BC 2 is susceptible to downy mildew.
Clonal selection in France

In France, the only certified BC 2 clone carries the number 1369.
Bibliographic references