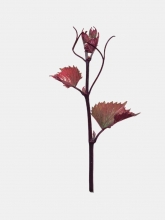 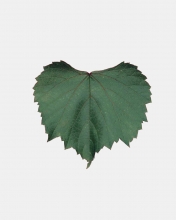 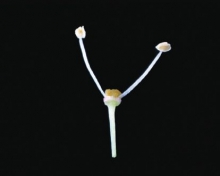 The identification is based on:
- the tip of the young shoot that is half open, with a low density of prostate hairs,
- the red young leaves,
- the shoots with a bushy and erect bearing, a ribbed surface, a circular or slightly elliptic section, a strong anthocyanin coloration, and no erect and prostate hairs,
- the small, kidney-shaped, dissymetric, light green, mate, entire adult leaves, with an involute and twisted leaf blade, an open V-shaped petiole sinus, a strong nathocyanin coloration of veins, teeth with straigh sides, and on the lower side of the leaves, no or a very low density of erect and prostate hairs,
- the male flowers,
- the browny grey woody shoots, with a striated surface.
Genetic profile

99 R is highly tolerant to the root form of phylloxera. Its resistance to Meloidogyne hapla nematodes is good but is only average regarding to Meloidogyne incognita and Meloidogyne arenaria nematodes.
Adaptation to the environment

99 R resists up to 25% of "total" limestone, 14% of "active" limestone and an ICP of 20. Its resistance to drought is moderate to high. It seems to be sensitive to soil acidity and chloride excess.
Interaction with grafts and production objectives

99 R has a good affinity to grafts. This rootstock confers a high vigor to the grafts. It tends to delay the growth cycle of the grafts and sometimes promotes coulure. The first plant development is rather slow. In addition, the risk of degeneration is increased with Syrah.
Vegetative propagation aptitudes

The length of the internodes is average and the diameter is medium to large. The growth of lateral shoot buds is widespread. 99 R wood production is moderate (30 000 to 40 000 m/ha) and has moderate cuttings rooting and grafting capacities.
Resistance to aerial parasites

This rootstock is very sensitive to the gall form of phylloxera. It is also sensitive to anthracnose but is highly resistant to downy mildew.
Clonal selection in France