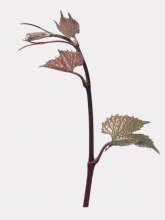 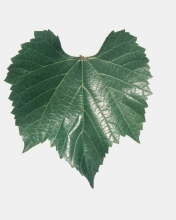 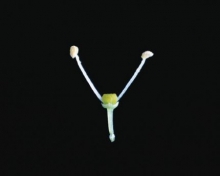 This variety results from the crossbreeding of Vitis berlandieri and Vitis riparia.
Evolution of mother vine surfaces

The identification is based on:
- the tip of the young shoot that is half open or closed, with a medium density of prostrate hairs,
- the slightly bronzed young leaves,
- the elongated shootd, with an elliptic section, a ribbed surface, red internodes and nodes on the dorsal side, and on the ventral side, green internodes and red nodes up to the tip, and no erect hairs,
- the wedge-shaped, shiny, dark green adult leaves, entire or with sometimes three or five lobes on the leaves at the base, with an open U-shaped petiole sinus, a moderate anthocyanin coloration of veins, and on the lower side of the leaves, a low density of erect hairs,
- the male flowers,
- the yellow or reddish brown woody shoots.
Genetic profile

420 A MGt is highly tolerant to the root form of phylloxera. Its resistance to Meloidogyne incognita and Meloidogyne arenaria nematodes is also good.
Adaptation to the environment

420 A MGt resists up to 35% of "total" limestone, 20% of "active" limestone and an ICP of 40. Its resistance to iron chlorosis is moderate to good. This rootstock seems well adapted to fertile conditions and to fairly deep clay-limestone soils with a sufficient water input. However, it is poorly adapted to compact soils and excessive spring humidity. 420 A MGt does not absorb well potassium in the soil. The varieties grafted, particularly the most sensitive, can frequently show signs of potassium deficiency with this rootstock.
Interaction with grafts and production objectives

420 A MGt confers a low vigor to the grafts and the vegetative development of the vines is limited. It does however tend to delay maturity. 420 A MGt promotes floral initiation. Given the low confered vigor, yields must be limited, particularly during the first years of production, to avoid unbalanced vines. 420 A MGt works well with Cabernet franc, Merlot and Tannat.
Vegetative propagation aptitudes

420 A wood production is moderate (30 000 to 60 000 m/ha) with canes that easily lignify, but the internodes diameter is sometimes thin. The growth of lateral shoot buds is significant. 420 A MGt has a low cutting capacity and a moderate grafting aptitude. In order to improve the percentage of cuttings rooting, a slightly more substantial hormoning may be applied.
Resistance to aerial parasites

420 A MGt is moderately tolerant to the gall form of phylloxera and it shows a good resistance to downy mildew.
Clonal selection in France