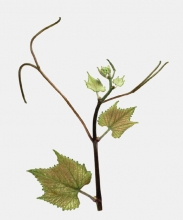 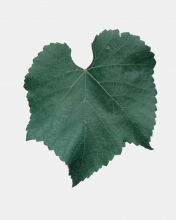 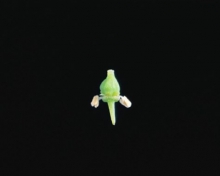 This variety results from the crossbreeding of Vitis vinifera cv. Chasselas and Vitis berlandieri.
Evolution of mother vine surfaces

The identification is based on:
- the tip of the young shoot that is open, with a piping anthocyanin coloration and a high density of prostrate hairs,
- the bronzed young leaves,
- the shoots with a very ribbed surface, a circular or slightly elliptic section and no erect and prostrate hairs,
- the fairly developed tendrils,
- the circular or wedge-shaped, entire adult leaves, with an almost completely involute leaf blade but revolute on the edges, a slightly open U- or lyre-shaped petiole, with sometimes naked petiole veins, short teeth with straight sides,
- the female flowers,
- the small, round-shaped berries, with a blue black skin,
- the woody shoots with a fairly large diameter, browny grey internodes and darker nodes.
Genetic profile

41 B MGt is moderately to highly tolerant to the root form of phylloxera. It is sensitive to Meloidogyne incognita, Meloidogyne arenaria and Meloidogyne hapla nematodes and seems susceptible to Agrobacterium vitis.
Adaptation to the environment

41 B MGt is characterized by its adaptation to limestone soils and its resistance to chlorosis. It resists up to 60% of "total" limestone, 40% of "active" limestone and an ICP of 60. It also absorbs well magensium in the soil. 41 B MGt is however sensitive to temporary water excess during the spring and its reistance to drought is moderate. It does not seem very adapted to too compact soils.
Interaction with grafts and production objectives

41 B MGt confers a moderate to high vigor to the grafts.It usually shows a good affinity with grafts even if problems have been noticed with Merlot and Pinot which is however grafted in significant amounts with this rootstock. The first plant development is rather slow. 41 B MGt promotes the compactness of grape clusters. It also tends to delay the vegetative cycle of grafts. Compared to other rootstocks, the varieties grafted onto 41 B MGt produce less rich in sugar and slightly more acidic fruits.
Vegetative propagation aptitudes

The length and diameter of the internodes are moderate to large and the wood production is low to medium (15 000 to 50 000 m/ha) with sometimes a certain proportion of dry canes. In mother plantation, 41 B MGt is both sensitive to water stress and to humidity excess in the soil. It is sometimes susceptible to the declining of the vine trunks. 41 B MGt canes easily lignify. Once collected, they must be properly stored and be sufficiently rehydrated before use. Their cleaning and disbudding is fairly easy. 41 B has a low to moderate cutting capacity, with sometimes necrosis at the bottom of the plants, but it displays good aptitude for grafting. A special care (duration, hormoning) must be paid during the stratification phase in order to avoid large calluses.
Resistance to aerial parasites

41 B MGt is highly tolerant to the gall form of phylloxera but is sensitive to downy mildew.
Clonal selection in France