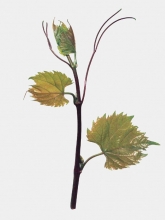 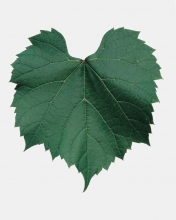 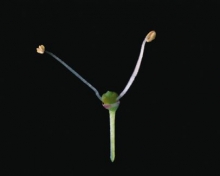 The identification is based on:
- the tip of the young shoot that is half open, with no or a very low density of prostrate hairs,
- the bronzed young leaves
- the shoots with a smooth surface and a moderate to strong anthocyanin coloration,
- the involute, kidney-shaped adult leaves, with an open brace-shaped petiole sinus,
- the male flowers,
- the browny red to purplish woody shoots with no erect and prostrate hairs.
Genetic profile

The tolerance of 4010 Cl to the root form of phylloxera is moderate. It must therefore be planted under unfavorable conditions for this pest, but its resistance to Meloidogyne arenaria and Meloidogyne incognita nematodes is good.
Adaptation to the environment

4010 Cl tolerance towards chlorosis is low and it only resists up to 6% of "active" limestone. This rootstock poorly absorbs magnesium. It is adapted to acidic soils, with very little or no limestone, rather deep, that can be compact but with a sufficient water input.
Interaction with grafts and production objectives

4010 Cl gives a fairly high vigor to the grafts and tends to favor their fertility. However, it also favors the earliness of the vegetative growing cycles.
Vegetative propagation aptitudes

4010 Cl wood production is moderate (30 000 to 40 000 m/ha) but has good cutting and grafting capacities.
Resistance to aerial parasites

4010 Cl tolerance to the gall form of phylloxera is moderate and its resistance to downy mildew is also moderate.
Clonal selection in France