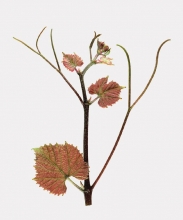 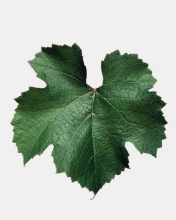 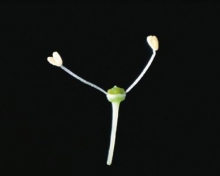 This variety results from the crossbreeding of Vitis vinifera cv. Cabernet-Sauvignon and Vitis berlandieri.
Evolution of mother vine surfaces

The identification is based on:
- the tip of the young shoot that is open, with a piping anthocyanin coloration and a high density of prostrate hairs,
- the reddish young leaves,
- the shoots with a very ribbed surface, a circular or slightly elliptic section and no erect and prostrate hairs,
- the circular adult leaves, entire or with five lobes, with shiny blistered leaf blade, involute and twisted on the edges, a brace-shaped slightly open petiole sinus or with slightly overlapping lobes and with often limited naked petiole veins,
- the male flowers,
- the woody shoots with a very ribbed surface.
Genetic profile

333 EM is moderately to highly tolerant to the root form of phylloxera. It is sensitive to Meloidogyne incognita and Meloidogyne arenaria nematodes.
Adaptation to the environment

333 EM is characterized by its very good adaptation to limestone soils and its resistance to chlorosis. In deed, it resists up to 60% of "total" limestone, 40% of "active" limestone and an ICP of 70. This rootstock is also well adapted to drought and to temporary water excess during the spring. On the other hand, it is sensitive to chlorides. 333 EM is well adapted to shallow, dry and limestone soils.
Interaction with grafts and production objectives

333 EM gives a high vigor to grafts and provides fairly high yields. It can however sometimes promote coulure phenomenon. The first development of plants is fairly slow with this rootstock. Under not very fertile or limiting conditions, the varieties grafted onto 333 EM produces good quality products.
Vegetative propagation aptitudes

333 EM wood production is very low (10 000 to 30 000 m/ha) and autumn climatic conditions must be favorable in order to get a proper lignification of canes. 333 EM has a moderate cutting capacity and a good grafting aptitude, but the large cane diameter may be bothersome.
Resistance to aerial parasites

333 EM is highly tolerant to the gall form of phylloxera and moderately resistant to downy mildew. On the other hand, it is very sensitive to bud mite disease.
Clonal selection in France