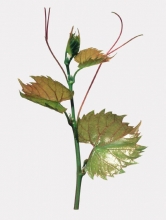 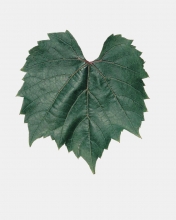 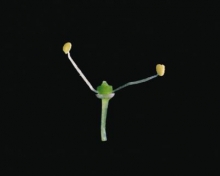 This variety results from the crossbreeding between Vitis riparia (tomentose) and Vitis rupestris cv. Martin.
Evolution of mother vine surfaces

The identification is based on:
- the tip of the young shoot that is closed, with a low to medium density of erect hairs and no prostate hairs,
- the reddish to bronzed young leaves,
- the purplish shoots with a bushy and erect bearing, an elliptic to circular section, and no erect and prostate hairs,
- the small to medium, circular, entire adult leaves, with an open U-shaped petiole sinus, sometimes with naked petiole veins, or V-shaped for the leaves of the secondary shoots, a smooth, shiny, involute leaf blade, sometimes slightly  goffered or hammered, a moderate to strong anthocyanin coloration of the veins, and on the lower side of the leaves, a low density of erect hairs and no prostate hairs,
- the male flowers with anythocyanin coloration around the base of the petals,
- the browny red to purplish woody shoots, with erect or prostate hairs.
Genetic profile

3309 C has a very high tolerance to the root form of phylloxera but is sensitive to Meloidogyne arenaria and Meloidogyne incognita nematodes. It would be fairly tolerant to Agrobacterium vitis.
Adaptation to the environment

The 3309 C tolerance to chlorosis is low to moderate and it only resists up to 20% of "total" limestone, 11% of "active" limestone and an ICP of 10. However, it seems to be well suited to acidic soils. 3309 C is sensitive to water stress, particularly when it occurs suddenly during the growing cycle. Its adaptation to water excess is also weak. 3309 C absords magnesium very easily but potassium with more difficulty. This rootstock is extremely sensitive to chlorides and its use must be avoided if there is a risk of salinity. 3309 C is well adapted to deep, sandy-clay, clay-limestone, with no or very little limestone soils.
Interaction with grafts and production objectives

3309 C generally has a good affinity with grafts. However, some joining problems have been noticed with Cabernet-Sauvignon, Chenin, Dattier de Beyrouth, Pineau d’Aunis, Riesling, Syrah and Sauvignon. Some of these varieties are grafted in significant amount with 3309 C. The growth and fruit set speed given by 3309 C is a little slow. Vigor confered by 3309 C is low to moderate and vegetative growth is balanced, especially if the agronomic fertility of the soil is not too high. 3309 C promotes the fruit set of sensitive varieties to coulure. The varieties grafted onto this rootstock produce recognized quality products and the associations with Cabernet franc, Cabernet-Sauvignon, Chardonnay, Colombard, Fer, Gamay, Gros Manseng, Melon, Merlot, Petit Manseng, Pinot, Sauvignon, Semillon, Riesling, Syrah and Tannat are particular appreciated.
Vegetative propagation aptitudes

The length of the internodes is low to moderate and the diameter is moderate. The practice of green disbudding is recommended. The important growth of lateral shoot buds and the lignified tendrils make the cleaning and disbudding difficult. 3309 C wood production is low to moderate (20 000 to 50 000 m/ha) with sometimes a certain proportion of damaged wood. This rootstock has excellent cuttings rooting and grafting capacities. Its canes are easily preserved. They require a good rehydratation but the application of hormones is not necessary and should be moderate if performed.
Resistance to aerial parasites

This rootstock is sensitive to the gall form of phylloxera. It is also sensitive to anthracnose but shows a good resistance to downy mildew.
Clonal selection in France