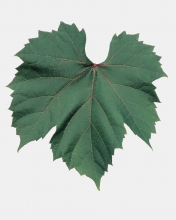 The identification is based on:
- the tip of the young shoot that is half open, with no or a very low density of prostrate hairs,
- the shoots with a smooth surface and a moderate to strong anthocyanin coloration,
- the circular, involute, funnel-shaped adult leaves, with a slightly open or closed petiole sinus, an undulate leaf blade between the veins, large teeth with straight sides,
- the male flowers,
- the browny red or purplish woody shoots with no erect and prostrate hairs.
Genetic profile

196-17 Cl is moderately tolerant to the root form of phylloxera and it is best to plant it under unfavorable conditions for this pest. It is aldo sensitive to Meloidogyne arenaria and Meloidogyne incognita nematodes.
Adaptation to the environment

196-17 Cl is sensitive to chlorosis and only resists up to 6% of "active" limestone and to an IPC of 5. It is well adapted to drought and acidic soils. 196-17 Cl is particularly suited to schist or granitic, dry, poor, superficial and stony soils along to sandy soils if there is no endoparasitic nematodes. This rootstock is also slightly tolerant to chlorides.
Interaction with grafts and production objectives

196-17 Cl gives a significant vigor to the graft and can be used to replace missing plants.
Vegetative propagation aptitudes

196-17 Cl is tolerant the gall form phylloxera is good and it is moderately resistant to downy mildew.
Clonal selection in France

In France, the only certified 196-17 Cl clone carries the number 99 and it is multiplied on 3 ha 63 ares of mother vines producing certified material, in 2017.