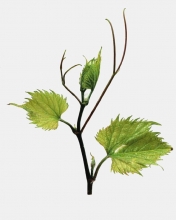 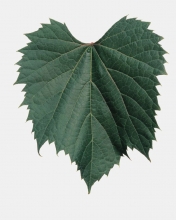 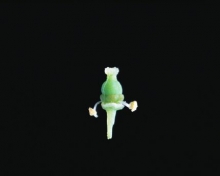 This variety results from the crossbreeding of Vitis longii and Vitis riparia.
Evolution of mother vine surfaces

The identification is based on:
- the tip of the young shoot that is closed, with a medium to high density of prostrate hairs,
- the green young leaves,
- the shoots with no erect and prostrate hairs,
- the wedge-shaped adult leaves, with a very open petiole sinus, very long teeth compared to their width with one side concave and one side convex (the three terminal teeth of the central main vein and the two main adjacent lateral veins are longer and more developed), and on the lower side of the leaves, a medium to high density of erect hairs,
- the female flowers,
- the very small, round-shaped berries, with a blue black skin,
- the woody shoots with no erect and prostrate hairs.
Genetic profile

1616 C is highly tolerant to the root form of phylloxera and is well resistant to Meloidogyne arenaria and Meloidogyne incognita nematodes.
Adaptation to the environment

1616 C is not very or moderately tolerant to chlorosis and it only resists up to 11% of "active" limestone. It is fairly well adapted to humidity in addition to its tolerance to chlorides. 1616 C is well suited to sandy-clay soils.
Interaction with grafts and production objectives

The vigor confered by 1616 C is low. The varieties grafted onto this rootstock produce good quality products.
Vegetative propagation aptitudes

1616 C wood production is moderate (40 000 to 60 000 m/ha) and has good cuttings rooting and grafting capacities. With vigorous grafts, the bulging at the graft union can become quite large.
Resistance to aerial parasites

1616 C has a good tolerance to the gall form of phylloxera and a decent resistance to downy mildew and anthracnose.
Clonal selection in France