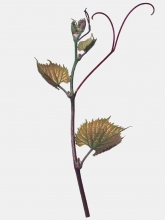 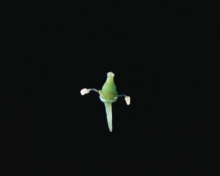 This variety results from the crossbreeding of Vitis riparia and Vitis berlandieri.
Evolution of mother vine surfaces

The identification is based on:
- the tip of the young shoot that is half open, with a medium density of prostrate hairs and a piping anthocyanin coloration,
- the slightly bronzed young leaves,
- the elongated shoots with an elliptic section, a ribbed surface, red internodes and nodes on the dorsal side, green internodes and red nodes on the ventral side, with a very low density of erect hairs on the internodes and a low to medium density of erect hairs on the nodes,
- the wedge-shaped, dark green adult leaves, with an undulate leaf blade between the veins, an open U-shaped petiole sinus with often naked petiole veins (at least on one side), a weak to moderate anthocyanin coloration of veins, teeth with straight sides (the tooth of the center vein is the longest with one side concave and one side convex), and on the lower side of the leaves and on the petiole a medium to high density of erect hairs,
- the female flowers,
- the very small, round-shaped berries, with a blue black skin,
- the light to dark brown woody shoots.
Genetic profile

161-49 C resists up to 40% of total limestone, 25% of "active" limestone and an IPC of 50. 161-49 C drought resistance is moderate to high. This rootstock is very sensitive to tylosis, particularly when the plants are young, which may increase sereve case of apoplexy. This rootstock is also susceptible to temporary water excess during the spring. 161-49 C is well adapted to limestone or clay-limestone, not very compact, light and fairly deep soils. Too compact soils should be avoided. Over the past few years, cases of declining young vines grafted on 161-49 C have been reported. Southern regions seem to be the most affected, even if plots presenting problems have also been noticed in other regions. Initial symptoms (a significant decrease of vigor) most often occur from the third year after being planted. Cambium failure is generally observed on the plants affected by an abnormal trunk and root thickening. Research is currently in progress to better understand this phenomon, which has appeared under certain soil and climatic conditions. Until the real causes of this syndrome are understood, great care is recommended when selecting this rootstock.
Interaction with grafts and production objectives

The growth and fruiting speed given by 161-49 C is quite slow. In addition, the limited yields during the first years reduces the risks of tylosis. This rootstock confers a moderate vigor and balances the vegetative growth. The varieties grafted onto 161-49 C produce quality fruits and the blends made with Chardonnay, Colombard, Merlot, Pinot and Ugni blanc are particularly appreciated. It also shows good results with hybrid grapes. However, some joining problems have sometimes been reported, particularly with Carignan, Gamay and Servant.
Vegetative propagation aptitudes

161-49 C wood production is moderate (30 000 to 60 000 m/ha) with sometimes a certain proportion of damaged wood. The cleaning and disbudding is difficult due to a large number of tendrils. The cutting and grafting capacities of 161-49 C is only moderate. Canes must be maintained under good conditions. This rootstock requires a special care during the stratification phase (duration, hormoning) up until the planting in the nursery.
Resistance to aerial parasites

161-49 C is moderately susceptible to the gall form of phylloxera and is highly resistant to downy mildew.
Clonal selection in France