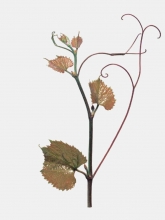 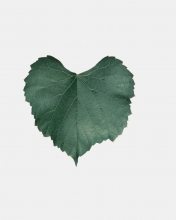 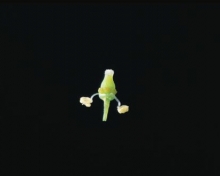 This variety results from the crossbreeding of Vitis berlandieri and Vitis rupestris cv. Martin.
Evolution of mother vine surfaces

The identification is based on:
- the tip of the young shoot with a high density of prostrate hairs,
- the sligtly bronzed young leaves,
- the shoots with a bushy and erect bearing, a ribbed surface, red or pinkish internodes on the dorsal side, green on the ventral side, and a high density of erect hairs on the nodes and the internodes,
- the small, kidney-shaped, entire, adult leaves, with an open V- or brace-shaped petiole sinus, a light green leaf blade, folded towards the upper side of the blade, and on the lower side of the leaves, a medium density of erect hairs,
- the female flowers,
- the very small, round-shaped berries, with a blue black skin,
- the woody shoots with a medium density of erect hairs.
Genetic profile

1447 P is highly tolerant to the root form of phylloxera. Its resistance to Meloidogyne incognita and Meloidogyne arenaria nématodes is also very good.
Adaptation to the environment

1447 P is characterized by a moderate to high adaptation to limestones soils. It resists up to 17% of "active" limestone. It is also resistant to drought.
Interaction with grafts and production objectives

1447 P confers a strong vigor. Thus, the varieties grafted onto it produce high yields but the plants development is rather slow.
Vegetative propagation aptitudes

This rootstock has good cutting and grafting capacities.
Resistance to aerial parasites

1447 P is susceptible to the gall form of phylloxera but is highly resistant to downy mildew.
Clonal selection in France

In France, the only certified 1447 Paulsen clone carries the number 1307.
Bibliographic references