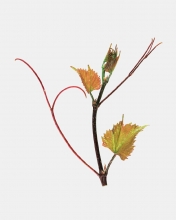 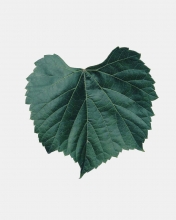 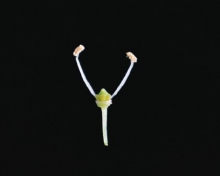 The identification is based on:
- the tip of the young shoot that is half opened, with a low density of prostrate hairs,
- the shiny, slightly bronzed young leaves,
- the shoots with a horizontal bearing, a ribbed surface, a circular or slightly elliptic section, and no erect and prostrate hairs,
- the medium, kidney-shaped, slightly involute, entire, shiny adult leaves, with a widely open brace-shaped petiole sinus, a weak anthocyanin coloration of veins, medium size teeth with convex sides, a smooth leaf blade, slightly undulate between the veins, and on the lower side of the leaves, no or a very low density of erect and prostrate hairs,
- the male flowers.
Genetic profile

140 Ru is very highly tolerant to the root form of phylloxera. This root stock resistance to Meloidogyne arenaria nematodes is high but is only average regarding to Meloidogyne incognita nematodes.
Adaptation to the environment

140 Ru is characterized by its good adaptation to limestone soils and its high drought resistance. It resists up to 50% of "total" limestone, 20% of "active" limestone and an ICP of 90. 140 Ru absorbs well magnesium and is essentially suited to dry, poor, superficial and stony limestone soils.
Interaction with grafts and production objectives

140 Ru confers a very high vigor. This rootstock induces a strong plant development and tends to delay the growth cycle. Associations with very vigorous varieties, such as Grenache, Sauvignon, Sultanine, Ugni blanc and especially Mourvèdre, should be kept for exceptional situations. Associations with these varieties and with others like Caladoc, Carignan, Marselan, Négrette, Tempranillo and Syrah, may cause issues due to the development of large calluses and bulging at the graft union or bad joining at the graft point. The plants concerned redden during the autumn for black varieties and turn yellow for white varieties, due to poor vascularization between the rootstock and the scion. They sometimes need to be replaced in young plantations.
Vegetative propagation aptitudes

The length of 140 Ru internodes is moderate, with a fairly large diameter. The growth of lateral shoot buds is moderate and the wood production is low to medium (25 0000 to 60 000 m/ha). Care needs to be taken to make sure that the canes are properly lignified, and then, the canes must be preserved under the right conditions. 140 Ru has a low cuttings rooting capacity and a moderate grafting aptitude as the joining areas are weak and often too big. A special care must be paid during the stratification phase (duration, hormoning) in order to avoid the formation of large calluses.
Resistance to aerial parasites

140 Ru is sensitive to the gall form of phylloxera but is highly resistant to downy mildew and is not very affected by anthracnose.
Clonal selection in France