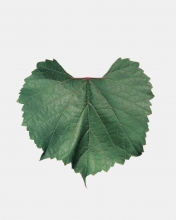 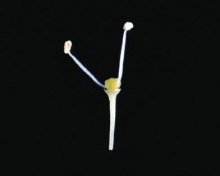 The identification is based on:
- the tip of the young shoot that is half opened, with a low density of prostate hairs,
- the slightly bronzed young leaves,
- the shoots with a bushy and horizontal bearing, a ribbed surface, red internodes on the dorsal side and green on the ventral side, no prostate hairs and a low density of erect hairs on the nodes,
- the fairly developped tendrils,
- the small to medium, wides, kidney-shaped, involute, twisted, and entire adult leaves, with an open petiole sinus, with naked petiole veins, a weak anthocyanin coloration of vein near the petiole sinus, short to medium length teeth compared to their width, a mate, rather light leaf blade, and on the lower side of the leaves, a low density of erect hairs and no or a very low density of prostate hairs,
- the male flowers.
Genetic profile

1103 P is highly tolerant to the root form of phylloxera. On the other hand, its resistance to Meloidogyne incognita nematodes is moderate and it is sensitive to Meloidogyne arenaria nematodes.
Adaptation to the environment

1103 P resists up to 30% of "total" limestone, 17% of "active" limestone and an ICP of 30. Its resistance to iron chlorosis is moderate. It is well adapted to drought conditions along with compact soils and a possible significant temporary spring humidity. 1103 P absorbs well magnesium. In addition, it is well suited to acidic soil and has a fairly good tolerance to chlorides.
Interaction with grafts and production objectives

1103 P confers a high vigor and tends to produce suckers. This rootstock works well with Syrah, but some affinity problems have been noticed with Tempranillo.
Vegetative propagation aptitudes

1103 P wood production is low to medium (25 000 to 60 000 m/ha), with a certain proportion that can not be easily used (twisted or broken canes). The growth of lateral shoot buds is high, which contributes to the presence of tendrils, and makes this rootstock canes difficult to clean and disbud. 1103 P has a moderate cutting capacity and a very good grafting aptitude.
Resistance to aerial parasites

1103 P is moderately susceptible to the gall form of phylloxera and is highly resistant to downy mildew.
Clonal selection in France