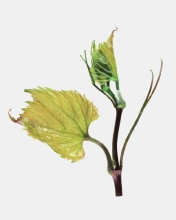 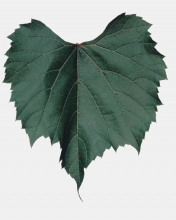 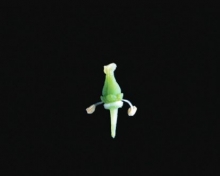 This variety results from the crossbreeding between Vitis riparia and Vitis rupestris.
Evolution of mother vine surfaces

The identification is based on:
- the tip of the young shoot that is completely closed, with a medium density of erect hairs and no prostate hairs,
- the bronzed young leaves, with well developed stipules at the base of the petioles,
- the shoots with a semi-erect or horizontal bearing, a striated surface, a circular section and a low density of erect hairs and no prostate hairs on the nodes,
- the medium to large, wedge- or kidney-shaped, entire adult leaves, with a widely open U-shaped petiole sinus, a smooth, slightly undulate leaf blade between the veins, long teeth compared to their width with straight sides or with one side slightly convex and one side slightly concave (the three terminal teeth of the central main vein and the two main adjacent lateral veins are longer and more developed), and on the lower side of the leaves, no prostate hairs and a medium density of erect hairs, more particularly at the bifurcation of the veins,
- the female flowers,
- the very small, round-shaped berries, with a blue black skin,
- the long, browny yellow or beige woody shoots.
Genetic profile

101-14 MGt is very tolerant to the root form of phylloxera and to Meloidogyne incognita and Meloidogyne arenaria nematodes.
Adaptation to the environment

101-14 MGt is ot very tolerant to chlorosis. It only resists up to 20% of "total" limestone, 9% of "active" limestone and an ICP of 10. 101-14 MGt is also fairly sensitive to soil acidity along with copper toxicity and boron deficiency. This rootstock is sensitive to drought but is fairly well adapted to humidity. It has a ramified root system similar to that of Riparia Gloire de Montpellier. 101-14 MGt absorbs well magnesium and is adapted to fairly deep, clay soils with very little or no limestone and a sufficient water input.
Interaction with grafts and production objectives

101-14 MGt usually has a very good affinity with the grafts. The first growth of plants is fast but the vigor confered is nevertheless limited. Thus, this rootstock contributes to manage the plant growth and has an influence on the earliness of the vegetative cycle. 101-14 MGt induces moderate yields with an often a lower average berry weight compared to those obtained with other rootstocks. The varieties grafted onto 101-14 MGt generate balanced, quality products with good maturity and the associations with Cabernet franc, Cabernet-Sauvignon, Chardonnay, Chenin, Colombard, Gamay, Grenache, Petit Verdot, Sauvignon, Semillon and Syrah are appreciated.
Vegetative propagation aptitudes

101-14 MGt has long internodes with medium diameter. The growth of lateral shoot buds is also moderate and the cleanin and disbudding is a little difficult. 101-14 MGt wood production can be variable depending on the conditions (30 000 to 80 000 m/ha). The canes are easily preserved and this rootstock has good cuttinf and grafting capacities.
Resistance to aerial parasites

101-14 MGt is moderately tolerant to the gall form of phylloxera. It is also fairly sensitive to anthracnose but shows a good resistance to downy mildew.
Clonal selection in France