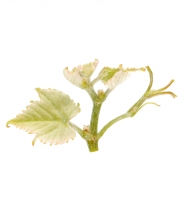 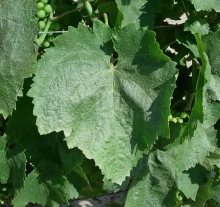 The identification is based on:
- the tip of the young shoot with a high density of prostrate hairs,
- the green yellowish young leaves,
- the shoots with red-striped internodes,
- the dark green, entire adult leaves, with a closed petiole sinus with overlapping lobes, short teeth compared to their width at the base with straight or convex sides, a weak anthocyanin coloration of veins, a moderately to strongly blistered, sometimes goffered leaf blade, involute on the edges and undulate between the veins, and on the lower side of the leaves, a low density of erect hairs and a medium density of prostrate hairs,
- the round-shaped berries with a significant bloom.
Genetic profile

Xinomavro is a vigorous and productive variety with a semi-erect or erect bearing. It must preferentially be pruned short and grown onto light soils, with a limited fertility, for the production of red wines. As a late-season variety, it needs high temperatures during the season and a good pruning and trellising management to reach a proper maturity. Xinomavro may be susceptible to potassium and boron deficiency.
Susceptibility to diseases and pests

Xinomavro's bunches and berries are medium in size. The berries have a juicy pulp. The wines have a rather high acidity, tannins and a moderate color. This variety can produce a large range of wines, from the ligh and aromatic rosé to the tannic, full-bodied red wines that are suited to barrel ageing. Thanks to its acidity level, Xinomavro can also be used to make "blanc de noir" sparkling wines. Too high yields or an insufficient maturity can lead to unbalanced wines. Xinomavro's typical aromas are complex and involve red berries and spices.
Clonal selection in France

The only certified Xinomavro clone carries the number 1255.
Bibliographic references