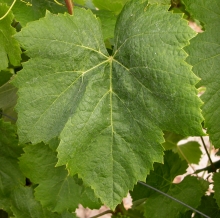 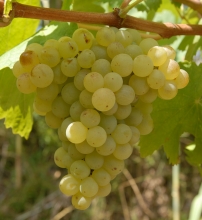 Xarello is originally Spanish (Catalonia). Based on published genetic analyses, it would be the result of a crossbreeding between Gibi and Brustiano faux.
Synonyms

In Spain, Xarello is officially designated as "Cartoixa", "Pansa Blanca", "Pansal" and "Xarel-lo". These synonyms are officially recognized in France regarding plant propagation material.
Legal information

The identification is based on:
- the tip of the young shoot with a high density of prostate hairs,
- the yellow or green young leaves,
- the large, circular adult leaves, entire or with five lobes, with shallow lateral sinuses, a slightly open or closed V-shaped petiole sinus or with parallel edges, small to medium teeth with straight sides, no or a weak anthocyanin coloration of veins, a folded leaf blade near the petiole sinus, and on the lower side of the leaves, a low to medium density of erect and prostate hairs,
- the round-shaped berries.
Genetic profile

Xarello is a fairly vigorous variety, fertile, productive and requires short pruning. It is well adapted to southern areas and drought.
Susceptibility to diseases and pests

Xarello is not very sensitive to grey rot.
Technological potentiality

Xarello's buncges are medium to large in size and the berries are medium. The sugar potential is average. Xarello can be used to produce sparkling wines and still white wines, that are mostly blended.
Clonal selection in France

The only certified Xarello clone carries the number 6007.
Bibliographic references