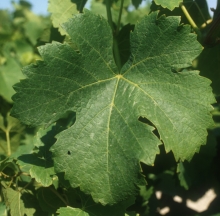 This is a native variety from the northern part of the Côtes du Rhône.
Synonyms

In France, Viognier is officially listed in the "Catalogue of vine varieties" on the A list and classified. This variety is also listed in the catalogues of other Member States of the European Union: Austria, Croatia, Greece, Italy, Malta, Portugal and Spain.
Use

The identification is based on:
- the tip of the young shoot with a medium to high density of prostate hairs,
- the green young leaves with slightly bronze spots,
- the small to medium, circular, light to medium green adult leaves, with three or five lobes, with shallow lower lateral sinuses, an open or slightly open petiole sinus, medium teeth with straight or convex sides or with one side convex and one side concave, no anthocyanin coloration of veins, a blistered leaf blade, curly on the edges, and on the lower side on the leaves, a low to medium density of erect and prostate hairs,
- the round-shaped berries.
Genetic profile

This variety is usually trained (it is sometimes sensitive to the wind), pruned moderately long and with a fairly high planting density. Traditionally grown in acidic terroirs, this variety is well adapted to sufficiently deep soils (but not too fertile) in southern areas, to avoid the risk of drought. Its early budburst exposes it to spring frosts.
Susceptibility to diseases and pests

Viognier does not seem particuliarly sensitive to diseases.
Technological potentiality

The bunches are small and compact. The berries are also small. Under favorable conditions, the varietal characteristics of Viognier allows for the production of very aromatic (abricot, peach, etc.), complex and powerful good quality wines. Viognier gives warm wines (high sugar accumulation potential): full-bodied but lacking a bit of acidity and occasionally presenting a slight bitterness. It can also be used to produce sweet or sparkling wines or blended (5, 10 % or more) with other grapes (particularly Syrah) to add finesse and aromas to red wines.
Clonal selection in France

The three certified Viognier clones carry the numbers 642, 1042 and 1051. A conservatory of 60 or so clones was planted in the wine-growing region of Condrieu (French department of Rhône) in 2002.
Bibliographic references