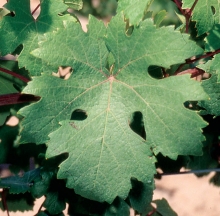 Verdesse is originally from the Isère region. Based on genetic analyses carried out in Montpellier, this variety would be closely related to Savagnin.
Synonyms

In France, Verdesse is officially listed in the "Catalogue of vine varieties" on the A list and classified.
Use

The identification is based on:
- the tip of the young shoot with a medium density of prostrate hairs,
- the small, circular, dark green adult leaves, with five, seven or nine lobes, deep lateral sinuses, an open or closed U-shaped petiole sinus, medium teeth with convex or straight sides, a weak to moderate anthocyanin coloration of veins, and on the lower side of the leaves, a medium density of erect hairs,
- the ellipsoid berries.
Genetic profile

This variety must be pruned long. Good results are achieved on clay-limestone hillsides.
Susceptibility to diseases and pests

Verdesse is not very susceptible to grey rot, but is more sensitive to powdery and downy mildew.
Technological potentiality

The bunches and berries are small to medium in size. Verdesse produces generous and lively wines which are marked by vegetal and floral aromas.
Clonal selection in France

The two certified Verdesse clones carry the numbers 931 and 1303. A conservatory of ten or so clones was planted in the wine-growing region of Savoie in 1999.
Bibliographic references