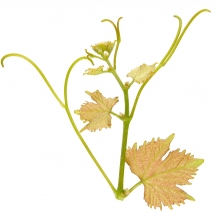 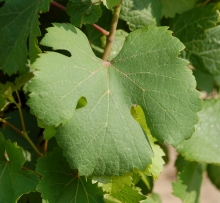 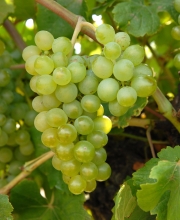 This variety is originally from Spain, probably from the Castile y León region. Based on genetic analyses carried out in Montpellier, Verdejo would result from the crossbreeding of Savagnin and Castellana blanca.
Synonyms

In France, this variety can officially be called "Verdejo blanco" regarding plant propagation material.
Legal information

In France, Verdejo is officially listed in the "Catalogue of vine varieties" since 2015 on the A list and classified.
Use

The identification is based on:
- the green tip of the young shoot with a low density of prostrate hairs and a slight piping distribution of anthocyanin coloration,
- the green or copper young leaves with bronze spots and a low density of prostrate hairs,
- the shoots with red-striped internodes,
- the small, circulo-kidney-shaped adult leaves, with five or more rarely three lobes, an open U-shaped petiole sinus, small teeth, moderately long compared to their width at the base with straight or convex sides, a moderate anthocyanin coloration of veins, a finely blistered, slightly twisted or with revolute edges leaf blade, and on the lower side of the leaves, a low or very low density of erect and prostrate hairs,
- the ellipsoid berries.
Genetic profile

Verdejo has a semi-erect to erect bearing and grows well under dry climates. In very fertile circumstances, an excess of vigor may increase the risk of coulure. This variety is sensitive to the wind. As its bud burst is early, Verdejo is also susceptible to spring frosts. It is best to prune it moderately long, such as a Guyot training system.
Susceptibility to diseases and pests

Verdejo’s bunches are medium in size and compact. The berries are also medium, simple-flavored, with a thick skin, a lot of bloom and a juicy pulp. They keep a good acidity during the maturation. Verdejo musts and wines are quite sensitive to oxidation. Varietal Verdejo aromas are pronounced : apple, pear, citrus fruits, bitter almond, aniseed and freshly cut grass. This variety produces aromatic, fresh, lively, full-bodied, balanced, round white wines that are suited to ageing. Verdejo produces great quality ageing wines. In case of under ripeness, wines can have a herbaceous flavor.
Clonal selection in France

The only certified Verdejo clone carries the number 1302.
Bibliographic references