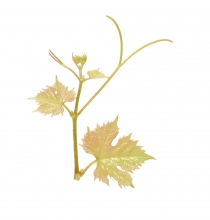 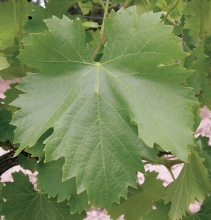 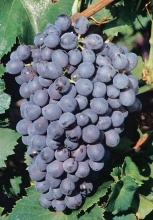 This table grape variety would originally be from Spain or the South of France.
Synonyms

In Spain, Valensi noir is officially designated as "Valenci Tinto". This synonym is officially recognized in France regarding plant propagation material.
Legal information

The identification is based on:
- the tip of the young shoot with a medium to high density of prostate hairs,
- the green young leaves with bronze spots,
- the circular adult leaves, with three or five lobes, an open U-shaped petiole sinus, small teeth with straight sides, no or a weak or moderate anthocyanin coloration of veins, a twisted, finely blistered leaf blade, and on the lower side of the leaves, a low density of erect hairs and no prostate hairs,
- the ellipsoid berries.
Genetic profile

Valensi noir is a stongly vigorous variety with a semi-erect bearing that must be pruned long.
Susceptibility to diseases and pests

Valensi noir's bunches are large with a long and not very lignified peduncle. Berries are medium to large in size with a lot of bloom. The pulp is juicy, with a simple flavor.
Clonal selection in France