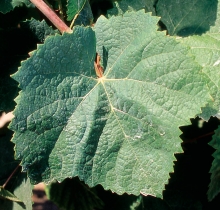 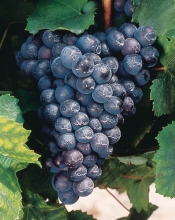 Valdiguié would originally be from the Quercy region.
Synonyms

In France, Valdiguié is officially listed in the "Catalogue of vine varieties" on the A list and classified.
Use

The identification is based on:
- the tip of the young shoot with a high density of prostrate hairs,
- the yellow young leaves,
- the pentagonal adult leaves, entire or with three lobes, with a slightly open petiole sinus with parallel edges or slightly overlapping lobes, short teeth compared to their width at the base with straight sides, no anthocyanin coloration of veins, a blistered leaf blade, undulate between de veins, and on the lowers side of the leaves, a low to medium density of erect and prostrate hairs,
- the round-shaped or slightly ellipsoid berries, with often small berries that remain green.
Genetic profile

This variety is fertile, productive, with an erect bearing, and is well adapted to short pruning.
Susceptibility to diseases and pests

The bunches and berries are medium to large in size. Valdiguié produces colored, bright, light wines, with a low alcohol degree and tannins that are a little bit astringent.
Clonal selection in France