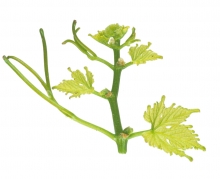 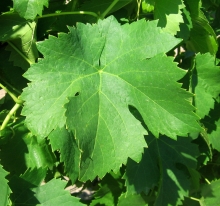 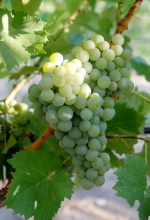 This variety is originally from Corsica.
Synonyms

In France, Uva biancona is officially listed in the "Catalogue of vine varieties" since 2020 on the A list and classified.
Use

The identification is based on:
- the tip of the young shoot with a low to very low density of prostrate hairs,
- the green yellowish young leaves,
- the short internodes,
- the adult leaves with three or five lobes, deep V shapes lateral sinuses with slightly overlapping lobes, a V shaped not very open or closed petiole sinus with overlapping lobes and often a tooth on the edge, long teeth compared to their width at the base with straight sides, no anthocyanin pigmentation of veins, a finely blistered, slightly twisted or involute leaf blade, and on the lower side of the leaves, no erect and prostrate hairs,
- the round-shaped or slightly obloid.
Genetic profile

Bud burst: 8 days after Chasselas.
Grape maturity: late-season, 5 weeks and a half after Chasselas
Suitability for cultivation and agronomic production

Uva biancona is a vigorous, very productive variety that must be pruned short. It has a semi-erect to erect bearing. The bunches can be preserved for a long time on the vine, up until November or December, without alteration. This variety is a little sensitive to coulure.
Susceptibility to diseases and pests

Uva biancona is sensitive to esca and also seems to be quite sensitive to downy mildew. In some vintage, this variety can be susceptible to sour rot.
Technological potentiality

Uva biancona's bunches are large in size and compact. The berries are medium, simple-flavored, with a thick skin and a juicy pulp. Juice yield is low. The musts are a little sensitive to oxidation. The wines are low in alcohol, a strong acidity and neutral aromas. Uva biancona can be interesting to improve the liveliness in blends.
Clonal selection in France

The only certified Uva biancona clone carries the number 1337.

A conservatory of three clones has been planted in Corsica in 2006.