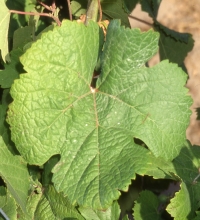 This variety, originally from the Jura region is, based on genetic analyses carried out in Montpellier, probably a descendant of Savagnin.
Synonyms

In the European Union, Trousseau is officially called by other names: Bastardo (Cyprus, Portugal) and Merenzao (Spain). These synonyms are officially recognized in France regarding plant propagation material.
Legal information

In France, Trousseau is officially listed in the "Catalogue of vine varieties" on the A list and classified. This variety is also listed in the catalogues of other Member States of the European Union: Cyprus, Portugal and Spain.
Use

The identification is based on:
- the tip of the young shoot with a high density of prostrate hairsand a piping distribution of anthocyanin coloration,
- the circular adult leaves, with five lobes, shallow lateral sinuses, a slightly open petiole sinus or with slightly overlapping lobes with opposing edges towards the lower side, short teeth with convex sides, no or a weak anthocyanin coloration of veins, a twisted, slightly goffered, very blistered and folded near the petiole sinus leaf blade, and on the lower side of the leaves, a low to medium density of prostrate hairs,
- the ellipsoid berries.
Genetic profile

Trousseau is a vigorous variety which must be planted in well exposed terroirs to reach proper maturity. Short or long pruning suits it well according to climatic conditions.
Susceptibility to diseases and pests

Trousseau is fairly susceptible to diseases, particularly to grey rot. It is also quite suscpetible to vine leafhoppers and sensitive to wood diseases.
Technological potentiality

The bunches are small and the berries are medium in size. Trousseau produces characteristic, warm and full-bodied wines, with a light color if the yields are high. This variety's sugar accumulation potential is high.
Clonal selection in France