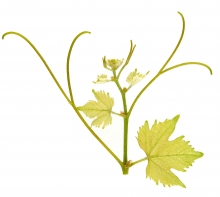 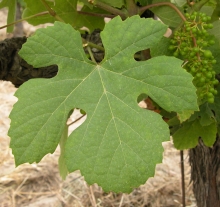 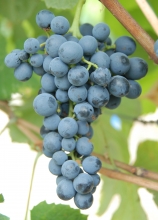 This variety is originally from Portugal.
Synonyms

In France, Touriga nacional is officially listed in the "Catalogue of vine varieties" since 2012 on the A list and classified. This variety is also listed in the catalogues of other Member States of the European Union: Croatia, Cyprus, Portugal and Spain.
Use

The identification is based on:
- the tip of the young shoot with a high density of prostrate hairs,
- the green young leaves,
- the circular or circulo-kidney-shaped adult leaves, with five lobes, U-shaped lateral sinuses, an open or slightly open petiole sinus, very short teeth compared to their width at the base with straight or concave sides, a finely blistered leaf blade, undulate between the veins, and on the lower side of the leaves, a medium density of erect and prostrate hairs,
- the ellipsoid berries.
Genetic profile

Touriga nacional is a variety with moderate vigor, with a semi-erect bearing. It can be pruned long. This variety must be trained. Touriga nacional should not be planted in soils that are too superficial.
Susceptibility to diseases and pests

Touriga nacional is not particularly sensitive to fungal diseases, except for phomopsis.
Technological potentiality

Touriga nacional's bunches are small with rather long peduncle. The berries are small to medium in size. This variety produces excellent quality, complex, aromatic, full-bodied, structured and very colored wines that are suited to ageing.
Clonal selection in France