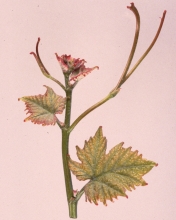 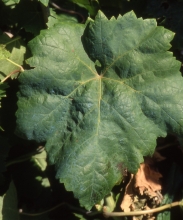 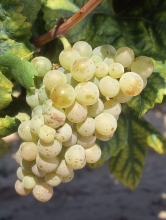 This variety would originally be from Catalonia but it can also be found in Sardinia.
Synonyms

In Italy, Tourbat is officially designated as "Torbato". This synonym is officially recognized in France regarding plant propagation material.
Legal information

The identification is based on:
- the tip of the young shoot with a high density of prostate hairs,
- the yellow young leaves with bronze spots,
- the adult leaves entire or with three or five lobes, with a petiole sinus with overlapping or very overlapping lobes, short teeth compared to their width at the base with straight or convex sides, no anthocyanin coloration of veins, a twosted revolute leaf blade, and on the lower side of the leaves, a low density of prostate hairs,
- the slightly ellipsoid berries.
Genetic profile

Tourbat displays a slightly drooping and bushy bearing. This variety is suited to short pruning and it must be planted in warm and dry soils. It is moreover a little susceptible to magnesium deficiency.
Susceptibility to diseases and pests

The bunches are large and loose. The berries are medium to large in size. Tourbat generally maintains a good acidty at full maturity and produces slightly aromatic and full-bodied wines.
Clonal selection in France