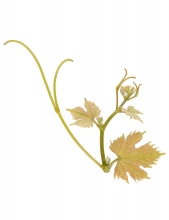 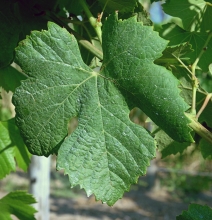 This variety is originally from Portugal, probably from the Douro region. Based on published genetic analyses, Tinta Barroca would be the result of the crossbreeding between Touriga nacional and Mourisco tinto.
Synonyms

In France, Tinta Barroca is officially listed in the "Catalogue of vine varieties" since 2013 on the A list but is not yet classified. This variety is also listed in the catalogue of Portugal.
Use

Bud burst: same as Chasselas.
Grape maturity: early-season, 1 week and a half to 2 weeks after Chasselas.
Suitability for cultivation and agronomic production

Tinta Barroca is vigorous and has a semi-erect bearing. It is best to trellish this variety and to prune it long as it is not very fertile if prune short. Tinta Barroca is not very adapted to drought and it is sensitive to burns. This variety should preferably be planted in deep enough soils, to provide a sufficient water supply.
Susceptibility to diseases and pests

Tinta Barroca is sensitive to downy mildew, powdery mildew and to vine leafhoppers. This variety is moderately susceptible to grey rot and phomopsis.
Technological potentiality

Tinta Barroca’s bunches are medium to large and moderately compact. The berries are medium in size, simple-flavored, with a thin skin and a juicy pulp. The wines are intensely colored. On high-altitude soils, this variety produces wines with a light tannin structure and floral aromas. In case of over-ripeness, the wines concentrate and have a good ageing potential. They can however lack acidity.
Clonal selection in France