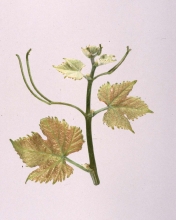 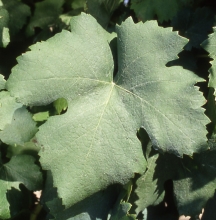 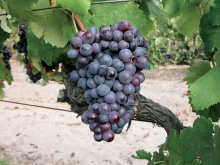 Terret noir is originally from the Languedoc region.
Synonyms

In France, Terret noir is officially listed in the "Catalogue of vine varieties" on the A list and classified.
Use

The identification is based on:
- the tip of the young shoot with a high density of prostate hairs,
- the green or yellow young leaves with bronze spots,
- the adult leaveswith three lobes, U-shaped lateral sinuses with overlapping lobes, a slightly open or closed petiole sinus with overlapping lobes, medium teeth with straight or convex sides, no anthocyanin coloration of veins, a flat leaf blade, and on the lower side of the leaves, medium density of erect and prostate hairs,
- the round-shaped or slightly ellipsoid berries.
Genetic profile

Terret noir has an erect bearing and is well adapted to gobelet or cordon training systems.
Susceptibility to diseases and pests

Terret noir is rather sensitive to downy mildew and powdery mildew. It is also susceptible to wood diseases.
Technological potentiality

The bunches are large and the berries are medium in size. Terret noir produces light, not very alcoholic and not very colored wines.
Clonal selection in France