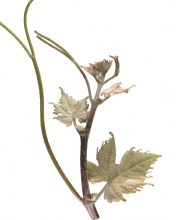 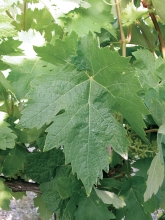 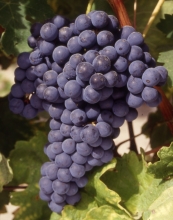 Tempranillo is originally from Spain (Rioja). Based on published genetic analyses, it would be the result of a crossbreeding between Albillo Mayor and Benedicto.
Synonyms

In the European Union, Tempranillo is officially called by other names: Aragonez (Portugal), Tinta roris (Cyprus) and Tinto tempranillo (Cyprus). These synonyms are officially recognized in France regarding plant propagation material.
Legal information

In France, Tempranillo is officially listed in the "Catalogue of vine varieties" on the A list and classified. This variety is also listed in the catalogues of other Member States of the European Union: Bulgaria, Cyprus, Greece, Italy, Malta, Portugal and Spain.
Use

The identification is based on:
- the tip of the young shoot with a high to very high density of prostrate hairs,
- the yellow young leaves,
- the large, pentagonal, bluish-green adult leaves, with five lobes with an elongated central lobe, deep lateral sinuses, a petiole sinus with overlapping lobes, medium to long teeth with straight sides, a twisted, undulate between the veins near the petiole sinus or slightly goffered leaf blade, and on the lower side of the leaves, a medium density of erect hairs on the veins and a medium density of prostrate hairs,
- the round-shaped berries.
Genetic profile

This variety is rather rustic and vigorous. It is well adapted to southern conditions but its branches are brittle and it is sensitive to the wind. Its early nature makes it possible to widen its growing areas (cooler climatic zones) and to harvest it before equinox rains. It is sufficiently fertile to be pruned short, but sometimes Tempranillo can show a certain alternation.
Susceptibility to diseases and pests

Tempranillo is not very sensitive to grey rot. It is especially susceptible to eutypa dieback and vine leafhoppers.
Technological potentiality

The bunches are large (elongated) and the berries medium in size. In favorable terroirs, Tempranillo produces very pleasant, nicely colored and full-bodied quality wines but that are lacking acidity in hot zones. The quality and the alcohol degree drop quickly when the yields become excessive.
Clonal selection in France