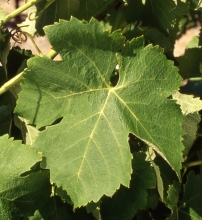 This variety is seemingly originally from the northern Côtes du Rhône or the Dauphiné region. Based on published genetic analyses, it would be the result of crossbreeding between Mondeuse blanche and Dureza.
Synonyms

In France, this variety can officially be called "Shiraz" or "Serine" regarding plant propagation material. Syrah is officially designated as "Shiraz" in Cyprus, Germany, Italy and Malta.
Legal information

En France, la Syrah is officially listed in the "Catalogue of vine varieties" on the A list and classified. This variety is also listed in the catalogues of other Member States of the European Union: Austria, Bulgaria, Croatia, Cyprus, Germany, Greece, Hungary, Italy, Malta, Portugal, Slovenia and Spain.
Use

The identification is based on:
- the tip of the young shoot with a high density of prostrate hairs,
- the green young leaves,
- the shoots with a ribbed surface and long green internodes,
- the adult leaves with five lobes, open lateral sinuses, an open petiole sinus with sometimes naked petiole veins, short to medium teeth with convex sides, no anthocyanin coloration of veins, a sometimes goffered leaf blade, and on the lower side of the leaves, a low to medium density of prostrate hairs,
- the ellipsoid berries.
Genetic profile

This variety produces long shoots that are fragile to the wind in spring and must be carefully trellised. In most cases, short pruning is sufficient in southern zones. Syrah is sensitive to chlorosis, poorly adapted to soils with high active limestone content. Then, grafting onto 110 R must absolutely be avoided. This variety ripens quickly, resulting in a relatively short véraison-ripeness period. The optimum harvest period is short and is evaluated not only by considering sugar and acidity concentrations, but also by the weight of the berries, bunches and berry analysis, and berry tasting.
Susceptibility to diseases and pests

Syrah is not very susceptible to downy mildew but is rather sensitive to mites and grey rot, especially at the end of the ripening period. This variety has a specific decline behavior, characterized by leaf reddening combined with at the grafting point, which can in the long term cause the vine trunks to die. To date, the causes remain unknown and no disease causative agent have been identified, but significant behavioral differences between clones have been noted.
Technological potentiality

The bunches are small to medium in size and the berries are small. Syrah can produce great quality red wines with a fairly high alcohol degree, that are suited to ageing. This variety gives very aromatic, fine, tannic, robust, complex (spices, violet, olive, leather-animal, etc) wines with relatively low acidity (pH is sometimes rather high, particularly on schist soils), which tend to have an intense (blue-toned) color. Syrah also produces very fruity and interesting rosé wines.
Clonal selection in France