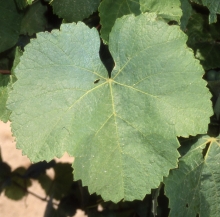 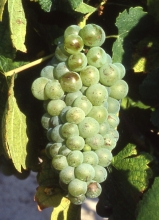 This variety would originally be from central Europe (Austria). Based on published genetic analyses, Sylvaner would result from the crossbreedinf of Savagnin and Österreichisch Weiß.
Synonyms

In France, Sylvaner is officially listed in the "Catalogue of vine varieties" on the A list and classified. This variety is also listed in the catalogues of other Member States of the European Union: Austria, Belgium, Bulgaria, Croatia, Cyprus, Czech Republic, Germany, Greece, Hungary, Italy, Luxembourg, Netherlands, Slovakia, Slovenia and Spain.
Use

The identification is based on:
- the tip of the young shoot with a medium density of prostate hairs,
- the green young leaves,
- the shoots with green internodes
- the shiny, circular, entire adult leaves, with a slightly open petiole sinus with parallel edges or slightly overlapping lobes, short teeth with convex sides, no anthocyanin coloration of veins, a twisted leaf blade and on the lower side of the leaves, no or a very low density of erect and prostate hairs,
- the round-shaped berries.
Genetic profile

Sylvaner is a variety with a steady production. It is however rather sensitive to spring frosts and its wood sometimes has difficulty to lignify. Sylvaner is not suited to terroirs that induce too much chlorosis.
Susceptibility to diseases and pests

The bunches are small and the berries are small to medium in size. Sylvaner produces fairly lively wines with delicat aromas. Under favorable circumstances and with managed yields, this variety can produce wines that are ampler and with more complexity.
Clonal selection in France

The two certified Sylvaner clones carry the numbers 50 and 487. A conservatory of approximately 300 clones was planted in Alsace in 1990.
Bibliographic references