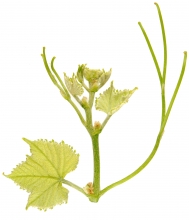 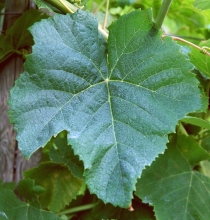 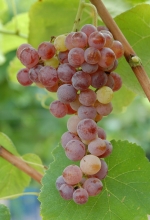 This table grape variety has been obtained in 1935 at the Geneva Station, in New York State. This interspecific hybrid’s pedigree involves Vitis labrusca and Vitis vinifera.
Synonyms

In France, Suffolk red is officially listed in the "Catalogue of vine varieties" since 2015 on the A list.
Use

The identification is based on:
- the green tip of the young shoot with a medium to high density of prostrate hairs,
- the green yellow young leaves with a low to medium density of prostrate hairs,
- the shoots with green internodes,
- the circular, entire adult leaves, with a closed V-shaped petiole sinus with overlapping lobes, mucronate teeth, short compared to their width at the base with straight or concave sides, no anthocyanin coloration of veins, a twisted or revolute, finely blistered leaf blade, undulate between the veins, and on the lower side of the leaves, no or a very low density of erect and prostrate hairs,
- the obloid or round-shaped berries, with a pink skin at maturity.
Genetic profile

Suffolk red has a semi-erect to erect bearing. This variety has a vigorous vegetation that recquires regular tipping and topping. As its productive potential is low, this variety must be pruned long. Suffolk red strongly expresses magnesium deficiency. It is sensitive to drought, millerandage and winter frosts. This variety can sometimes have berry shrivelling problems at maturity.
Susceptibility to diseases and pests

Suffolk red’s bunches are small and loose. The berries are seedless, small, with a slightly foxy flavor, a thin skin and a juicy pulp. At maturity, the berries are a little acidic and rather sugary. During the storage, Suffolk red can be sensitive to berry shedding.
Clonal selection in France