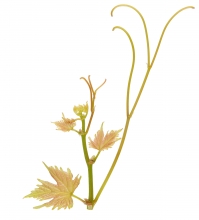 The variety Sophie (an interspecific hybrid) was obtained by G. Weiss and G. Mayer in Austria.
Synonyms

Sophie has a semi-erect to erect bearing. This variety is vigorous and productive.
Susceptibility to diseases and pests

Sophie is not very sensitive to downy mildew and powdery mildew, but it is a little more susceptible to grey rot.
Technological potentiality

Sophie’s bunches are large to very large and moderately compact. The berries are large, simple-flavored, with a thin to moderately thick skin and a firm and juicy pulp.
Clonal selection in France