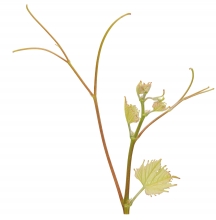 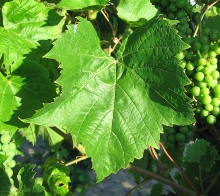 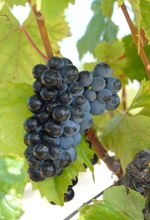 Silara is an interspecific hybrid obtained by Seibel. Its parents are not known.
Synonyms

In France, Silara is officially listed in the "Catalogue of vine varieties" since 2017 on the A list.
Use

The identification is based on:
- the tip of the young shoot with a medium to high density of prostrate hairs and a piping distribution of anthocyanin coloration,
- the green yellow young leaves, with a medium density of prostrate hairs and a low density of erect hairs,
- the thin red shoots,
- the small adult leaves, entire or with five lobes, with an open V-shaped petiole sinus, moderately long teeth compared to their width at the base with straight sides or with one side convex and one side concave, ellongated star-shaped main veins (with the five corresponding teeth that are prominent and clearly longer than the others compared to their base), a weak to moderate anthocyanin coloration of veins, a shiny, involute, folded, slightly goffered and roughly blistered leaf blade, and on the lower side of the leaves, a low to very low density of erect and prostrate hairs,
- the round-shaped or obloid berries.
Genetic profile

Silara has a horizontal or semi-erect bearing and looks like its leaves have been thinned out. This variety is fertile and produces a lot of grappillons that can almost be a second harvest. Silara is sensitive to potassium deficiency and chlorosis.
Susceptibility to diseases and pests

Silara is sensitive to powdery mildew and moderately sensitive to phomopsis. This variety is not very affected by vine leafhoppers and by bud mite disease.
Technological potentiality

Silara's bunches are small to medium in size and moderately compact. The berries are medium, with a slightly foxy flavor, a moderately thick skin and a fleshy pulp. Silara musts have a nice color potential, a pronounced acidity and a moderate sugar content.
Clonal selection in France

The only certified Silara clone carries the number 1248.
Bibliographic references