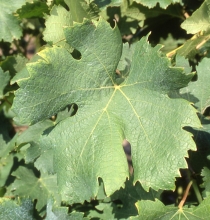 This variety would originally be from the Languedoc region. Based on genetic analyses carried out in Montpellier, it would result from the crossbreeding of Ferral and Wildbacher de Hongrie.
Synonyms

In France, Servant is officially listed in the "Catalogue of vine varieties" on the A list and classified. It is classified as a wine grape variety only in some French department (see the regulations in force). This variety is also listed in the catalogues of other Member States of the European Union: Italy and Spain.
Use

The identification is based on:
- the tip of the young shoot with a low density of prostrate hairs,
- the shoots with green internodes,
- the circular adult leaves, with seven or nine lobes, an open or slightly open U-shaped petiole sinus, short or medium teeth compared to their width at the base with straight sides, no anthocyanin coloration of veins, a slightly revolute leaf blade, and the on the lower side of the leaves, no or a very low density of erect and prostrate hairs,
- the round-shaped or slightly ellipsoid berries.
Genetic profile

Servant is well suited to white limestone soils that are not too dry. This variety is sometimes susceptible to millerandage. It also tends to grow a substantial number of grappillons.
Susceptibility to diseases and pests

Servant is mostly used as a table grape. The bunches and berries are large.The skin is thick and the pulp is fleshy with a simple flavor. This variety has a very good storage and transport capacity. When vinified, Servant produces relatively neutral white wines.
Clonal selection in France

The two certified Servant clones carry the numbers 72 and 88. These clones are mainy used for the production of table grapes.
Bibliographic references