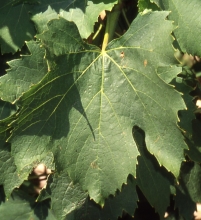 Servanin is originally from the north of the Isère region.
Synonyms

In France, Servanin is officially listed in the "Catalogue of vine varieties" on the A list and classified.
Use

The identification is based on:
- the tip of the young shoot with a high density of prostrate hairs,
- the reddish young leaves,
- the dark green adult leaves, entire or with three lobes, with a very open U- or V-shaped petiole sinus, long teeth compared to their width at the base with straight sides, no anthocyanin coloration of veins, an involute leaf blade and on the lower side of the leaves, a high density of erect hairs and a low density of prostrate hairs,
- the broad ellipsoid berries.
Genetic profile

Servanin is very vigorous, fairly fertile but susceptible to millerandage. Some berries stay green at maturity. Servanin is usually managed in high growth vine stocks. It seems well adapted to limestone or marly soils.
Susceptibility to diseases and pests

Servanin is susceptible to downy mildew but is not very affected by grey rot.
Technological potentiality

The only certified Servanin clone carries the number 1153.
Bibliographic references