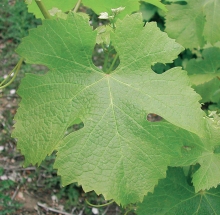 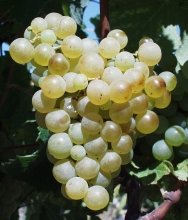 This variety is originally from the Bordeaux vineyards.
Synonyms

In France, Semillon is officially listed in the "Catalogue of vine varieties" on the A list and classified. This variety is also listed in the catalogues of other Member States of the European Union: Bulgaria, Croatia, Cyprus, Czech Republic, Hungary, Greece, Italy, Portugal and Spain.
Use

The identification is based on:
- the tip of the young shoot with a high density of prostate hairs,
- the green young leaves with bronze spots,
- the light to medium green adult leaves, with five lobes, an open or slightly open petiole sinus, short teeth compared to their width at the base with straight or convex sides, a weak or very weak coloration of veins, a slightly twisted leaf blade, very regularly blistered, and on the lower side of the leaves, a low density of prostate hairs,
- the round-shaped berries.
Genetic profile

Semillon has moderate vigor and is rather productive. This variety can be pruned moderately long or short. It reacts particularly to the agronomic fertility of the soil. The yields vary enormously depending on the terroirs. Semillon seems well adapted to gravelly or clay-limestone soils.
Susceptibility to diseases and pests

Semillon is sensitive to grey rot, black rot (on young leaves), to mites and vine leafhoppers. On the other hand, it is not very susceptible to powdery mildew and eutypa dieback.
Technological potentiality

The bunches are medium and the berries are large in size. Semillon, under favorable growing conditions, with adult vines and managed yields, produces full-bodied great quality dry white wines, with moderate to low acidity. These wines can be vinified in barrels and are suitable for ageing. Semillon also produces great white liqueur wines.
Clonal selection in France