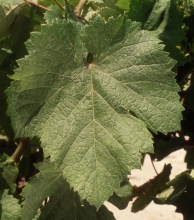 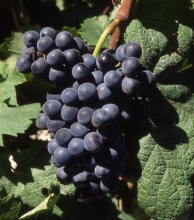 This variety was obtained by INRA in 1956 by crossbreeding Baroque and Cot.
Synonyms

In France, Semebat is officially listed in the "Catalogue of vine varieties" on the A list and classified.
Use

The identification is based on:
- the tip of the young shoot with a medium density of prostrate hairs
- the green young leaves with bronze spots,
- the shoots with red internodes,
- the circular adult leaves, entire or with three or five lobes, a petiole sinus with slightly overlapping lobes, medium teeth with straight sides, a strong anthocyanin coloration of veins, a twisted blistered leaf blade, and on the lower side of the leaves, a medium density of erect and prostrate hairs,
- the round-shaped berries.
Genetic profile

Semebat is a very vigorous veriety which must be managed, with a erect bearing. This variety is well suited for mechanized harvesting.
Susceptibility to diseases and pests

Semebat is not very sensitive to grey rot.
Technological potentiality

The bunches are medium in size and the berries are small. Semebat produces balanced, colored, robust wines with fairly high alcohol degree. Under unfavorable conditions, it can have herbaceous aromas.
Clonal selection in France

The only certified Semebat clone carries the number 746.
Bibliographic references