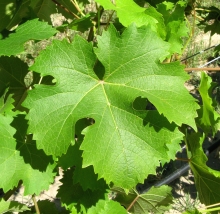 Sauvignac has been obtained by V. Blattner in Switzerland. This variety is an interspecific hybrid resulting from the crossbreeding of a descendant of Sauvignon x Riesling and a hybrid whose identity is unknown.
Synonyms

In France, Sauvignac is officially listed in the "Catalogue of vine varieties" since 2020 on the A list but is not yet classified.
Use

The identification is based on:
- the tip of the young shoot with a high density of prostate hairs and a piping distribution of anthocyanin coloration,
- the yellow young leaves,
- the shoots with red nodes and internodes on the dorsal side,
- the circular adult leaves, with three or five lobes, U-shaped upper lateral sinuses that stand out on the upper side, a slightly open petiole sinus, rather large teeth, moderately long compared to their width at the base with straight sides, a weak anthocyanin coloration of veins, red petioles, an involute, slightly blistered leaf blade, and on the lower side of the leaves, a low to very low density of erect and prostate hairs,
- the slightly obloid berries, whose skin turns yellow pinkish when ripe.
Genetic profile

Sauvignac has a semi-erect bearing. This variety is productive and moderately vigorous, which can lead to the depletion of the vine trunks if the yields are not managed. Thus, Sauvignac is not very adapted to mechanical pruning. Its foliage is sensitive to the wind and its shoots break easily. This variety is susceptible to magnesium and potassium deficiency.
Susceptibility to diseases and pests

Sauvignac’s bunches are small and moderately compact. The berries are medium in size, with a moderately thick skin. This variety produces light, pleasant wines, with citrus fruits and exotic fruits aromas. However, they can sometimes lack acidity.
Clonal selection in France