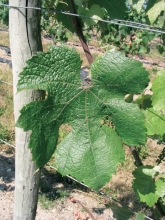 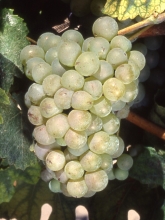 This variety is native to the Allier region and, based on published genetic studies, it would be the result of the crossbreeding between Pinot and Gouais blanc.
Synonyms

In France, this variety can officially be called "Tressallier" regarding plant propagation material.
Legal information

In France, Sacy is officially listed in the "Catalogue of vine varieties" on the A list and classified.
Use

The identification is based on:
- the tip of the young shoot with a high density of prostrate hairs,
- the green young leaves with bronze spots,
- the shoots with red-striped internodes,
- the adult leaves, entire or with five lobes, with a slightly open petiole sinus, medium teeth with straight sides, an involute blistered leaf blade, and on the lower side of the leaves, a low to medium density of prostrate hairs,
- the round-shaped berries.
Genetic profile

Sacy is a vigorous variety. Usually pruned long, this fertile variety can also be pruned short.
Susceptibility to diseases and pests

Sacy does not seem particularly susceptible to diseases.
Technological potentiality

The bunches and berries are small. Sacy mostly produces base wines for sparkling wines. They are light, fairly acidic with low alcohol degree. This variety can also be used to produce elegant still wines with character.
Clonal selection in France

The three certified Sacy clones carry the numbers 793, 833 and 965. A conservatory of almost 70 clones was planted in the French department of Allier in 2013.
Bibliographic references