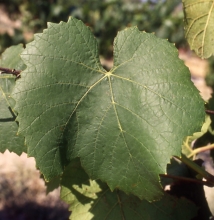 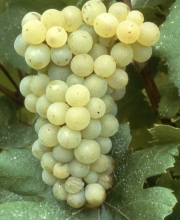 This variety is originally from the Yonne region and based on published genetic analyses, would be the result of the crossbreeding between Pinot and Gouais blanc.
Synonyms

In France, Roublot is officially listed in the "Catalogue of vine varieties" on the A list and classified.
Use

The identification is based on:
- the tip of the young shoot with a medium density of prostate hairs,
- the yellow young leaves with bronze spots,
- the adult leaves with five or seven lobes (the central lobe is divided), a slightly open petiole sinus or with slightly overlapping lobes, medium to long teeth compared to their width at the base with straight sides, a moderate anthocyanin coloration of veins, a twisted, revolute and blistered leaf blade, and on the lower side of the leaves, a medium density of erect hairs,
- the broad ellipsoid berries.
Genetic profile

Roublot has a semi-erect bearing. Its fertility is Good but irregular, which is why it must be pruned long.
Susceptibility to diseases and pests