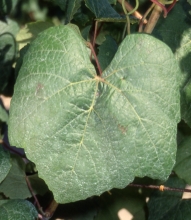 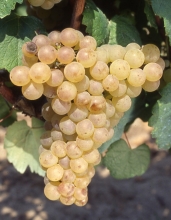 This variety would originally be from the center of France and based on published genetic studies, it would be the result of the crossbreeding between Pinot teinturier and Gouais blanc.
Synonyms

In France, this variety can officially be called "Danery" regarding plant propagation material.
Legal information

In France, Romorantin is officially listed in the "Catalogue of Vine Varieties" on the A list and classified.
Use

The identification is based on:
- the tip of the young shoot with a high density of prostate hairs,
- the yellow young leaves with bronze spots,
- the shoots with purplish-red internodes,
- the dark green adult leaves, entire or with three lobes, with an open V-shaped petiole sinus, short teeth compared to their width at the base with straight sides, a roughly blistered, goffered, involute leafblade with revolute edges, and on the lower side of the leaves, a medium density of erect and prostate hairs
- the round-shaped or slightly obloid berries.
Genetic profile

Bud burst: 1 day after le Chasselas.
Grape maturity: mid-season, 2 weeks and a half to 3 weeks after Chasselas.
Suitability for cultivation and agronomic production

This variety is fairly fertile and productive, with an erect bearing. Romorantin can be pruned long or short. It must be grown on adapted and early terroirs.
Susceptibility to diseases and pests

The bunches are medium to large while the berries are small. Romorantin produces fairly fine, fruity and pleasant wines.
Clonal selection in France

The four certified Romorantin clones carry the numbers 466, 873, 928 and 929. A conservatory of 50 or so clones was planted in the French department of Loir-et-Cher in 2007.
Bibliographic references