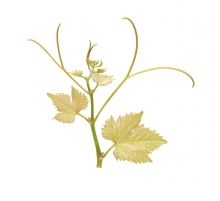 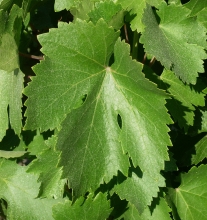 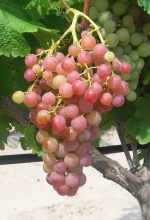 In France, Roditis is officially listed in the "Catalogue of vine varieties" since 2015 on the A list and classified. This variety is also listed in the catalogues of other Member States of the European Union: Cyprus and Greece.
Use

The identification is based on:
- the tip of the young shoot with a low density of prostrate hairs,
- the green young leaves with bronze spots,
- the shoots that can have red-striped internodes,
- the medium to large adult leaves, with three or sometimes five lobes, a slightly open or closed petiole sinus, medium to long teeth compared to their width at the base with convex or straight sides, a partial anthocyanin coloration of veins, a very shiny, involute, smooth or slightly blistered leaf blade, and on the lower side of the leaves, a low density of erect hairs and no or a very low density of prostrate hairs,
- the slightly ellipsoid berries.
Genetic profile

Roditis is a vigorous and productive variety with an erect bearing. It is drought tolerant. It is best if it is grown onto light and limestone soils. If Roditis is cultivated onto rich and deep soils, it will give high yields. This variety may sometimes be suscpetible to coulure or millerandage.
Susceptibility to diseases and pests

Roditis's bunches are medium to large in size and moderately compact. The berries are also medium to large, with a simple flavor, a moderately thick skin and a juicy pulp. The berries color is related to the yields, the higher they are, the greener the berries will be. Roditis' wines are balanced but not very suitable for ageing. This variety's typical aromas are peach, apricot, tropical fruits, apple and banana.
Clonal selection in France

The only certified Roditis clone carries the number 1254.
Bibliographic references