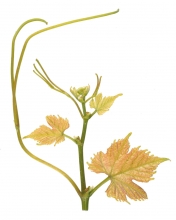 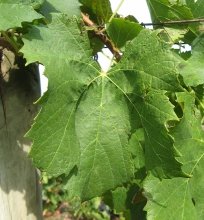 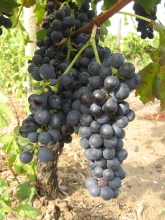 This variety is native to the Alpine vineyards. Based on genetic analyses carried out in Montpellier, Robin noir would result from the crossbreeding of Mondeuse blanche and Tressot.
Synonyms

In France, this variety can officially be called "Salagnin" regarding plant propagation material.
Legal information

In France, Robin noir is officially listed in the "Catalogue of vine varieties" since 2015 on the A list and classified.
Use

The identification is based on:
the green tip of the young shoot with a low to medium density of prostrate hairs and a piping distribution of anthocyanin coloration,
- the shiny green young leaves with bronze spots and a very low to low density of prostrate hairs,
- the shoots with green or red-striped internodes,
- the wedge-shaped or circular adult leaves, entire or with three or five lobes, with moderately deep narrow upper lateral sinuses, an open V- or U-shaped petiole sinus, small to medium teeth, moderately long or long compared to their width at the base with straight sides or with one side concave and one side convex, no anthocyanin coloration of veins, a twisted, blistered, slightly goffered leaf blade, sometimes folded near the petiole sinus, and on the lower side of the leaves, no or a very low density of erect and prostrate hairs,
- the ellipsoid or sometimes round-shaped berries.
Genetic profile

Robin noir is vigorous, productive and has a semi-erect to erect bearing. This variety can sometimes be susceptible to millerandage.
Susceptibility to diseases and pests

Robin noir is very sensitive to downy mildew but it is not very affected by powdery mildew.
Technological potentiality

Robin noir’s bunches are small to medium, often winged and compact. The berries are medium in size, simple-flavored, with a moderately thick skin and a juicy pulp. The berries have a good sugar accumulation potential but are not very acidic. This variety produces colored and tannic wines that are suited to ageing.
Clonal selection in France